Moving a bow across a metal plate to produce “sound figures,” following Ernst Chladni’s experiments in the 1780s. From William Henry Stone, Elementary Lessons on Sound (1879). 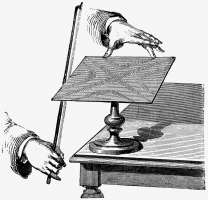 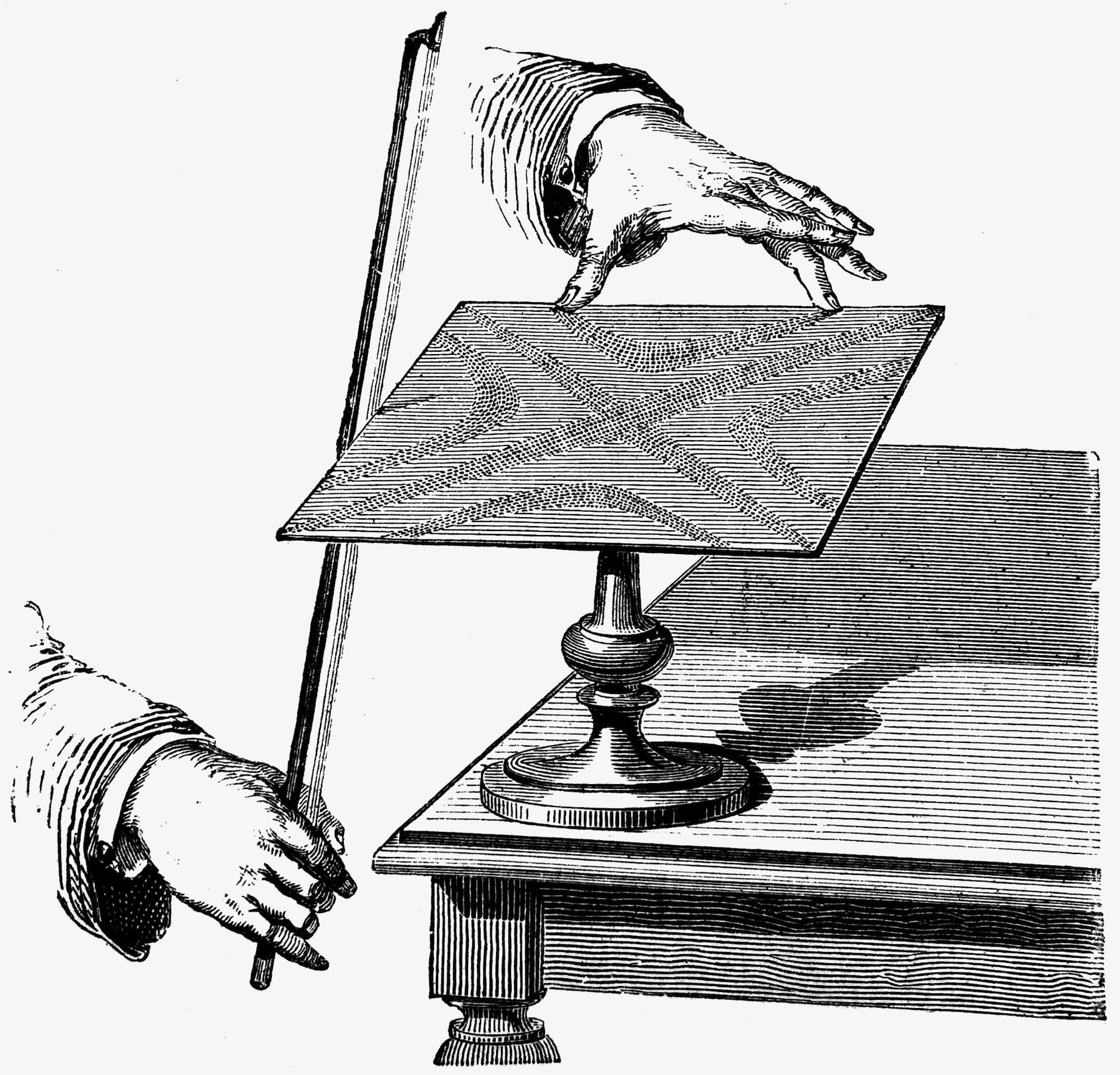 Moving a bow across a metal plate to produce “sound figures,” following Ernst Chladni’s experiments in the 1780s. From William Henry Stone, Elementary Lessons on Sound (1879).

The music-dramas of Richard Wagner are replete with spatial cues, including suggestions of distance, simulated echoes, and reverberation effects. While his late orchestrations were composed to harness the unique acoustic properties of his Bayreuth theater, several critics have pointed out how they simultaneously project an illusory auditory space, one that can even seem to mask the building itself. For Theodor Adorno, these gestures suggest musical stasis, giving the lie to assumptions of dynamism and progress and laying bare the regressive tendencies of bourgeois subjectivity.1 Friedrich Kittler counters that in revealing the purely acoustic basis of Wagner’s media apparatus, they render the humanistic faculties of imagination and philosophical reflection altogether obsolete.2 In either case, the explicit spatialization of sound not only changes how the physical environment is perceived but also seems to put pressure on the idea of the modern subject itself.

Perhaps it should be no surprise that the spatial effects conjured in Wagner’s music would unsettle conceptions of subjectivity. Since antiquity, architects have sought to secure auditory environments conducive to the mental activities of their occupants by regulating how buildings mediate sound. As a modern discourse of architectural acoustics has developed since the late eighteenth century, these efforts have taken the form of a growing concern to control one particular kind of sound: reverberation. The centrality of this phenomenon is evident in Emily Thompson’s study of acoustics in the early twentieth century, when the auditory design of buildings passed from the responsibility of architects to the new discipline of acoustic engineering. Her protagonist, the Harvard physicist Wallace Sabine, developed an equation for quantifying and predicting reverberation in architectural environments. As Thompson sees it, Sabine’s work helped turn the “live” sound of buildings into a commodity interchangeable with what could be heard on the everproliferating channels of auditory media.3

Thompson’s study underscores that sound has not been perceived the same way in all times and places. In making this point, she follows Alain Corbin’s efforts to connect a history of the production of sound with one of “modalities of attention, thresholds of perception, significance of noises, and configuration of the tolerable and intolerable.”4 The present special issue of Grey Room unfolds this question further to analyze the specific relationsp. 7 between architectural acoustics and the modern subject.5 Any idea of “the subject” is, of course, a construct. What the essays in this issue explore is how particular conceptions of subjectivity have been structured by the architectural mediation of sound and vice versa. They examine the specific auditory characteristics prescribed for the places where selves were to be formed, from domestic interiors to opera houses to academic lecture halls; consider the ways in which sonic design has positioned subjects relative to one another; and reflect on how the human perception of acoustics has been theorized in relation to ostensibly objective characteristics of the auditory environment.6

The authors in this issue write from a range of disciplinary perspectives, their research trajectories converging on the study of architecture as a crucial site of acoustic modernity. This convergence affords an opportunity to displace the traditional visual methods of architectural scholarship and answer the audio engineer Barry Blesser’s challenge for architectural thinkers to establish a disciplinary sensitivity to the auditory dimension of buildings that does not merely fall back on the language of acoustic science.7 Exploring how concepts of self have been formulated through relationships between sound and space, through evolving models of noise and reverberation, involves rethinking the scope of architectural discourse and, in the process, delineating the acoustic relationships upon which modern architecture itself is constituted.