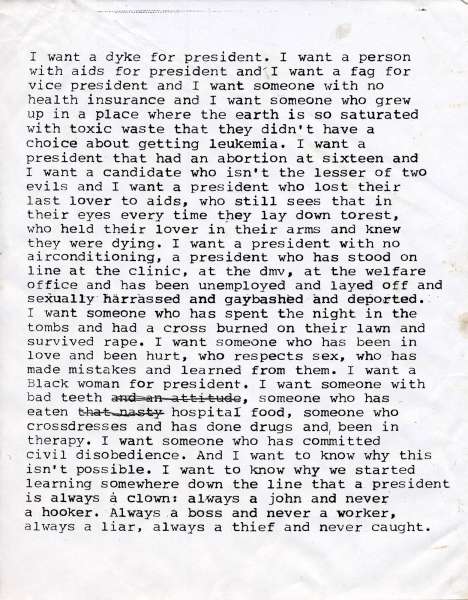 The current American political crisis is appalling but not unique. Long in the making yet somehow still shocking, the election of Donald Trump as the forty-fifth president of the United States is symptomatic of broader transformations unfolding across the globe. We are bearing witness to a toxic mix of populism, patriarchy, nationalism, neoliberalism, and financialization—locked, perhaps, in a fight to the death; or, potentially more catastrophic, mutating into some new hybrid form for which, as yet, we have no name.

Meeting only days after the election, the editors of Grey Room recognized that we could not let this moment pass in silence despite the inevitable logistical limitations of scholarly publishing. Academic journals are ill-equipped to seize the decisive time of kairos, which, as Antonio Negri writes, “is power at precisely the moment that the experience of time restlessly observes the edge over which it leans.” What we could offer at this juncture is a minor gesture of solidarity: to temporarily suspend academic business as usual, stopping the presses in order to assemble a collective response, opening the pages of Grey Room to a multitude of voices from within and outside the U.S., which were curated in part by us, the editors, and in part by the artists themselves, who were free to extend the invitation to others. Future issues of Grey Room will assist in the task of naming the current crisis. The present dossier aims simply to register the state of emergency in which we find ourselves.

The catalyst was Zoe Leonard’s word piece I want a president (1992), which begins “I want a dyke for president. I want a person with aids for president … ” and concludes “I want to know why we started learning somewhere down the line that a president is always a clown: always a john and never a hooker. Always a boss and never a worker, always a liar, always a thief and never caught.” Although written under different historical circumstances, this cri de coeur seemed uncomfortably apt to the present moment of counterrevolutionary identity politics. It was, indeed, the discomfort that forced the piece into our consciousness.

We number ourselves among the uncomfortably persuaded. And so we circulated Leonard’s I want a president to artists and requested their responses, in words and/or images, to the work or the crisis at large. Understandably, some could not find the right images or words. Others justifiably found the effort insufficient. But many responded with haste and conviction, soliciting further responses and widening our circle to unfamiliar voices. The pages that follow reproduce all the works submitted before we went to press. Individually and collectively, they register the crisis for our moment and for the dark days that surely lie ahead.