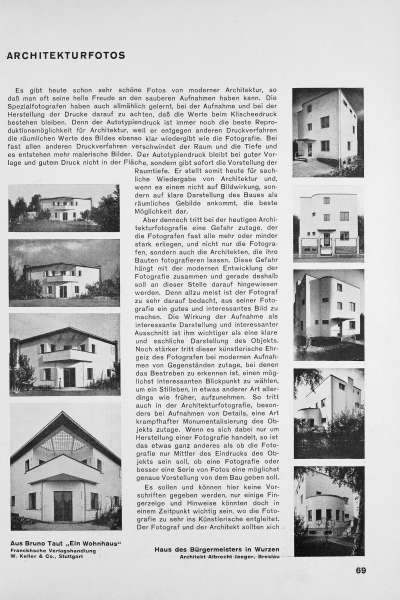 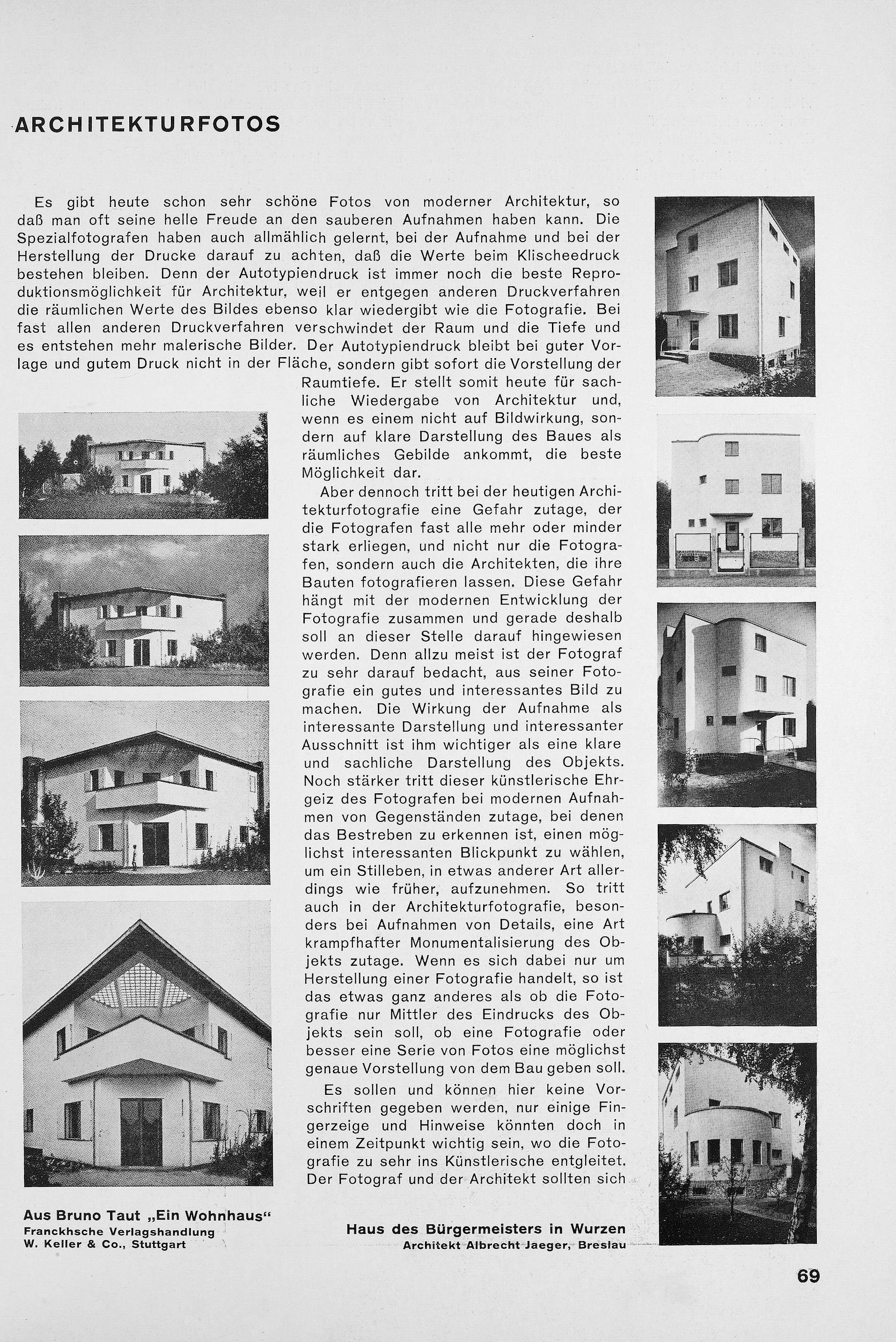 First page of Wilhelm Lotz, “Architekturfotos,” Die Form (February 1929). Left column: from Bruno Taut, Ein Wohnhaus [1927]. Right column: Albrecht Jaeger, Haus des Bürgermeisters, Wurzen. p. 103Today there are so many beautiful photographs of modern architecture that one can regularly revel in immaculate pictures. Professional photographs have slowly learned to attend, in their exposures and their prints, to the proper values for the final printed image. Indeed, autotypes remain the best reproduction option for architecture; for, compared to other printing processes, they render spatial values as well as actual photographic prints. In nearly all other printing processes, space and depth disappear, resulting in more painterly [malerische] images. With a good template and printer, autotypes are not restricted to the surface but immediately provide the impression of deep space. For the objective [sachlich] reproduction of architecture— that is, from the perspective not of visual impact but of clear presentation of buildings as spatial structures—autotypes are the best option.

And yet a danger is evident in current architecture photography— one to which nearly all photographers succumb to varying degrees, and not only the photographers but the architects who have their buildings photographed. This danger is linked to the modern development of photography and thus warrants discussion here. For all too often the photographer is anxious to turn his photographs into good and interesting pictures. To him the impression the photograph makes as an interesting representation and an interesting detail is more important than a clear and objective [sachlich] representation of the object. Such artistic ambitions on the part of the photographer are even more evident when accompanied by a noticeable effort to choose the most interesting possible viewpoint in order to make what amounts to a still life, albeit differently than before. Accordingly, we find in architecture photography a convulsive monumentalization of objects, especially in the capturing of details. If it were only a question of taking photographs, it would be entirely different than when we understand photography exclusively as a transmitter of impressions of objects; that is, if we understand a photograph—or, better, a series of photographs—as providing the most precise possible conception of a building.

This is not the place to lay down rules, but only a few important pointers and tips for those moments when photographers risk sliding into the artistic. Photographers and architects should always ask themselves whether the envisioned photographs will produce the most objective [sachlich] possible representation— and then photograph from this vantage point. Perhaps we must even establish a norm whereby we orient ourselves toward the cardinal directions more than toward interesting p. 104 pictures and details. Just as one always indicates the cardinal directions on a site plan, so too one should indicate on every photograph the cardinal direction from which the photograph was taken. This would be especially beneficial for residential buildings. We illustrate two attempts that are of interest insofar as they offer an interlink to—or, better, an approximation of— filmic representation. First, the photographer of a house by [Bruno] Taut advanced toward it incrementally from the countryside so that one perceives how it becomes more and more like a cube as one approaches it from a distance. In the second example, the photographer circled the house with his camera. By surveying the five ensuing photographs, one gains a sense of the house’s corporeal physicality [Körperlichkeit]. For the representation of architectural objects, similar strips of images [Bildstreifen] may productively supplement larger pictures, which better show details. As people prepare to mount a photography exhibition in Stuttgart [namely, Film und Fotografie or Fifo], they should consider these viewpoints and seek out options. Above all, they should consider the task of photography as the transmitter of impressions of objects.