Editor’s Introduction: The Costs of Architecture 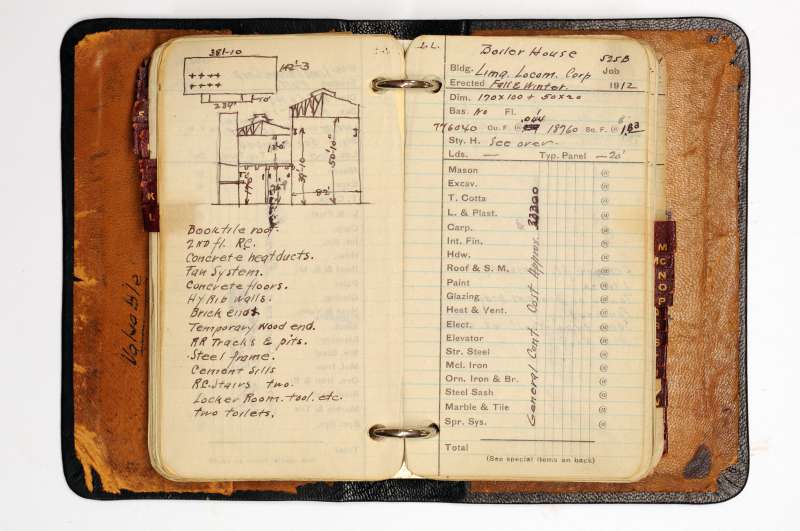 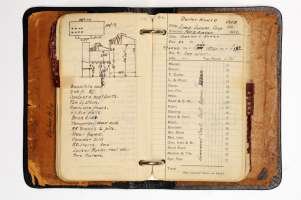 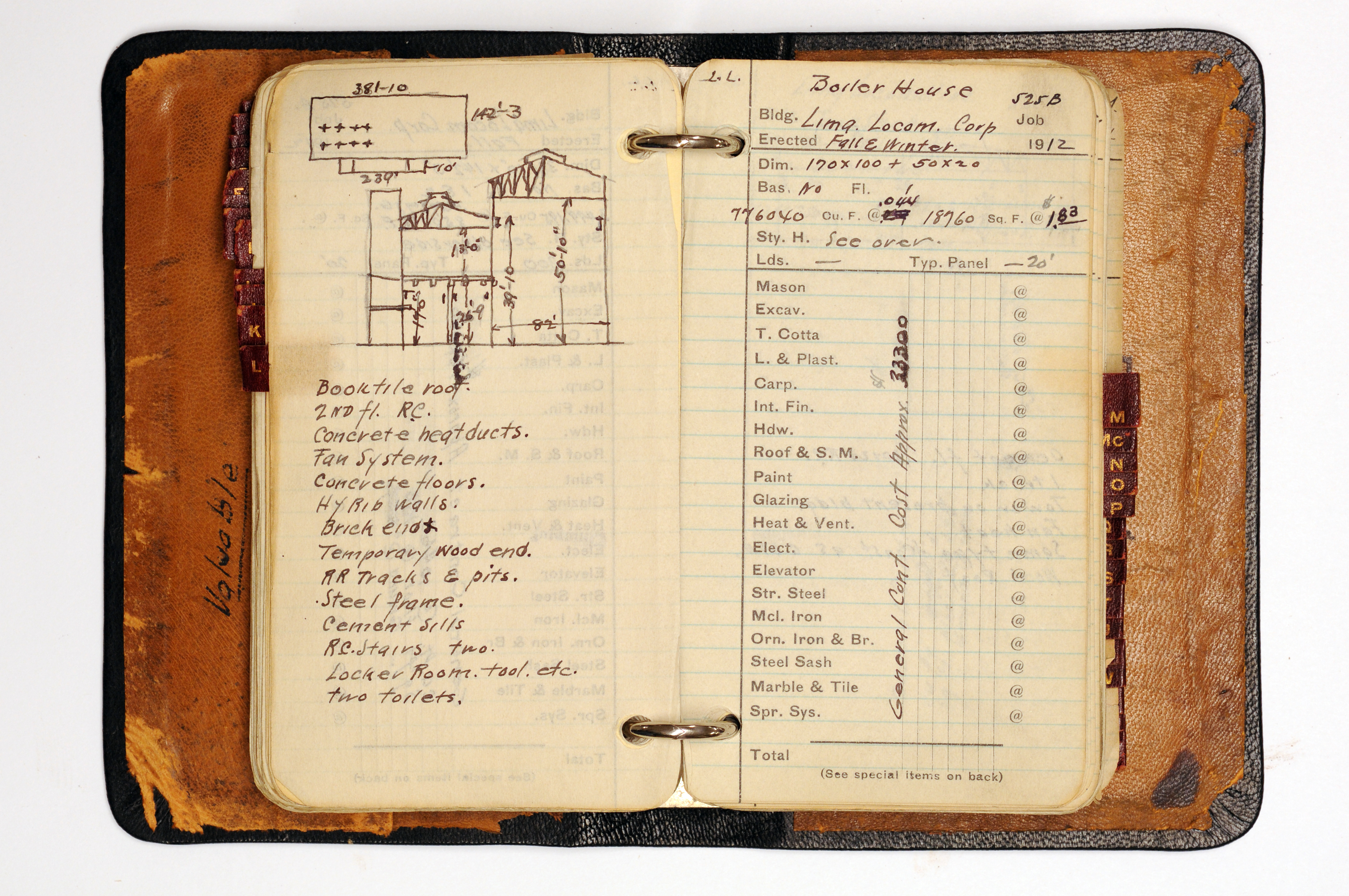 Albert Kahn. Personal cost ledger, 1907–1913. Cost Ledgers, Albert Kahn Associates Records, Bentley Historical Library, University of Michigan.p. 7 In 1986, Reyner Banham located the “null-sum” of architecture as a function of cost, identifying precisely where architecture crossed the line into mere building. Nearly forty years before that, Henry-Russell Hitchcock had made a similar distinction, classifying bureaucratic architecture as an income source for the profession but not the subject of architectural intellection. And fifteen years before Hitchcock, Alfred Barr had similarly distanced architecture from money-cost, minimizing the importance of quantity and asserting the importance of quality in architecture. Walking back through the twentieth century, buildings in which money-cost played a manifestly important role are simultaneously denoted as sites of mere building engineering and lack of architecture. For at least two of the three commentators, Detroit architect Albert Kahn (1869–1942) provided the relevant case study.1

Kahn is often cited as the extreme version of a professional architect for whom client satisfaction and cost efficiency were unquestioned mandates. With the help of five siblings, he ran a commercially successful, large-scale practice in Detroit until his death (one that grew to six hundred staff during World War II), and partnered in the creation of a necklace of related companies.2 Albert Kahn Associates, as the firm became known, benefited from and shaped the “Second Industrial Revolution” that unfolded from the end of the U.S. Civil War through World War II, with the auto industry at its center and sizable wartime military contracts infusing periodic cash boluses. One key to Kahn’s success was his cost accounting, illustrated evocatively in the small notebook he carried around with him from 1907 to 1913, at least. Kahn’s breast-pocket notebook soon gave way to a detailed set of loose-leaf notebooks, followed by an extensive card catalogue system, rediscovered in the basement of the firm in 2015. The Kahn firm accounted costs, not to the square foot but to the cubic foot (e.g., the Lima Locomotive factory cost $.044 per cubic foot)—a graphic demonstration of the spatialization of cost. This costing system was used for all the firm’s building programs, from residential additions to industrial campuses.

Kahn’s absence from many surveys of the history of modern architecture suggests p. 8 that cultural mandarins in the first half of the twentieth century may have had architects like him in mind when they aggressively assigned qualitative value to Euro- American modernism by omitting any mention of quantity—whether of dollars, of people, of materials, or of space. Budgets, whether for construction or design, were absent from architectural assessments richly imbricated with complex formations of class, taste, acculturation, and aspiration. For Barr and Hitchcock, these economies of culture necessarily protected architecture from the instrumentalizing forces of a finance economy, and—equally importantly—placed it firmly within the ambit of art, affiliating buildings and their representations with other objects in the Museum of Modern Art’s collections.3

More than fifty years after The International Style was published, Banham felt a similar need to locate Kahn at the intersection of industrialization and building— and to distance him from architecture. Banham’s “architectural null-value condition” casts Kahn as a “cheeseparer” whose “stylistic timidity” resulted from his close association with major manufacturers, particularly Henry Ford. According to Banham, architecture’s cultural economy could include industrial building, but Kahn’s “zero-term of architecture,” where cost-saving appeared so evidently visible both on a building’s very skin and in the thinness of its structural members, demarcated a line beyond which Banham would not venture.4 Here, low cost signaled lack of architecture. This thematic issue of Grey Room explores the line drawn by Banham, Hitchcock, Barr, and many others. The money-costs of buildings may indeed be indelibly marked on constructed projects, but with those markings—evident in records of the labor, materials, technology, and time required for construction—are also encoded the costs of naming architecture as such.5

The materialization of buildings on sites, despite the dynamic asymmetries of materials and execution that confront building construction, leaves traces of money spent. Studying these traces in a comparative manner reveals relationships between cost and cultural valuation—even if those relationships entail absence or pure deficit (as Banham argues). That is, paying attention to costs in the production of the built environment recasts quantification and qualification into a frame of analysis that includes both the internalized field of architectural discourse and the users of buildings. The subject provides a narrow yet penetrating opening into the larger ecosystem of architecture under capitalism and an invitation to periodize the technopolitical history of industrial production through building and architecture.6 The definition of Western architecture as cultural practice is predicated on the very distinction that is elided here: that there is something distinct called “architecture” p. 9 and something else that is cheaper, that is “mere building.” Yet existing disciplinary borders erode and change over time, and just as the built environment constitutes a historical text written across contemporary disciplinary boundaries, so does cost become a newly important metric for its history.

The articles in this issue explore the question of cost in architectural design, building construction, and architectural historiography, working from the eighteenth to the twentieth century and across the globe. The archival evidence their authors have painstakingly unearthed eloquently demonstrates the challenges faced by revisionist historians, who find the relevant data hidden, encrypted, contradictory, or simply absent. Why? What can building and design cost reveal of architecture’s changing relationship to capitalist modes of production over time?7 Costs may be reckoned in the past, present, or future as currency or debt, as amortized by floor area ratios or by real estate cycles, or as investments partly shielded from risk.8 Costs may be calculated in terms of labor or in unremunerated communal stewardship. Variation in costs—whether the result of land values, of labor, of material supply, or of logistics—are most explicitly registered in bid documents and specifications books. But cheapness and expense also surround building commissions more generally, suffusing the expectations of architects and clients alike. Reinhold Martin characterizes the rejection of cost from architectural critique, calling it a “transvaluation of value” wherein the question of quantity is driven out and quality, encoded by a range of imprecise and disparate signifiers, becomes the locus of assessment.9

This issue performs its own “transvaluation,” returning cost to the assessment of buildings over time and space. Not solely an investigation of building commerce, the study of cost presents the history of architecture in terms of what goes into it and how that input is hidden and encrypted by disciplinary structures dedicated to advancing cultural agendas as if independent of money. The issue also offers a “routine diagram” of a larger project, to borrow a phrase from industrial architecture, situating cost at the heart of a material-centered historical analysis of architecture and urbanism and extending it throughout the range of practices common to histories of the built environment.10 Such an analysis is not defined by national boundaries; it incorporates symbiotic relationships between nations and inter - national markets ripe for exploitation and highlights the manner in which politics— more effectively than Keynesian economics—structures economic relationships across international space.

When situated at the present moment, these articles suggest the larger stakes that attend the analysis of money and cultural production: the cultural exploitation of p. 10 unseen and underpaid labor, the swift and dramatic power of real estate speculation to enrich or impoverish, and the chimera of technological utopianism in the face of technological banality. Unsurprisingly perhaps, building costs also correlate with environmental effect. The articles in this issue thus address the cost of architecture from several positions, including that of workers, clients and speculative developers, and architects. They cover periods and spaces as far apart as eighteenth-century France, development-era Mexico, and neoliberal Hong Kong. But the contributors to this volume are all, in one way or another, affiliated by contemporary concerns regarding capitalism in crisis. Architectural historians have rarely insisted on knowing who spends what, and to what effect. Instead, the ends have always justified the invisible means.

The ubiquitous and mundane fact of building cost, then, to which we have not attended adequately, marches relentlessly behind the history of design and the built environment, with the potential to alter the very project of history-writing—to render it effectively sociopolitical. Just as money colors social organization at every level, so it colors the built environment across the board. This is not an effort to reduce architecture to its money-cost. Yet it does contain a claim that cost calibrates architecture’s effects across the board, and a call to assess practical strategies for addressing the power of money over everyday life in global space.11 The tools provided by and to the technical historian allow for precise, tactical interventions into the unfolding story of social and political life on specific sites, and also for coordinated strikes across the globe.

Editor’s Introduction: The Costs of Architecture

“The Cost of Architecture” was the title of two sessions, one at the Society of Architectural Historians Annual Conference in 2016 and a second at the College Art Association 2017 Annual Conference. My thanks to the participants in both sessions and also to Anooradha Siddiqi and Reinhold Martin, who commented generously on the CAA event. My grateful thanks and salutations to Lucia Allais, Zeynep Çelik Alexander, and the other Grey Room editors who worked on this issue and have entered into its concerns incisively. Collaborating with them has been a privilege. This is the first publication in a tactical research project aimed at incorporating cost data into architectural history by gathering historical information about the intersection of building production with economic forces. At the suggestion of the editors, we have changed the title to “The Costs of Architecture.”