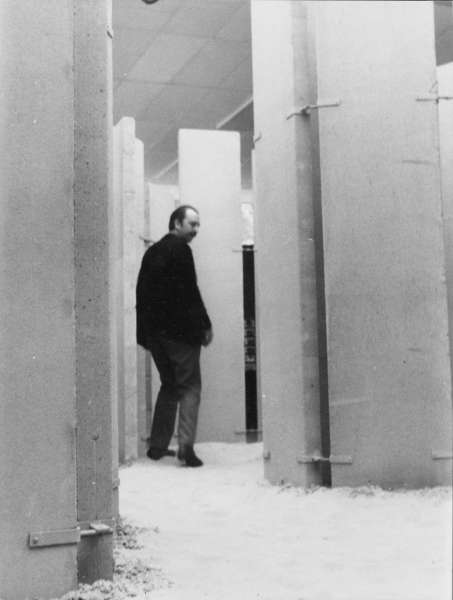 Contained in the personal archives of Asger Jorn is a two-page, typewritten document titled “Projet pour un labyrinthe éducatif” (Project for an educational labyrinth), signed by Guy Debord and dated December 8, 1956. Debord conceived this project for an exhibition at the Taptoe Gallery in Brussels—the Première Exposition de Psychogéographie—that was organized by Asger Jorn’s International Movement for an Imaginary Bauhaus and the International Lettriste movement, cofounded by Debord. The exhibition, with contributions by Jorn, Ralph Rumney, and Yves Klein, would ultimately take place in February 1957, but without the participation of Debord, who withdrew due to a momentary disagreement with Jorn. The aborted project thus went the same way as a later attempt, undertaken by the Situationist International, to construct a labyrinth, which, this time, was to be installed at the Stedelijk Museum during the spring of 1960. However, the negotiations between the Stedelijk Museum and the Situationist International broke down, leading to the publication of an accusatory text, “The World as Labyrinth,” in the fourth issue of the situationists’ journal. If curator and museum director Willem Sandberg had dared to descend into the labyrinth, they wrote, he “would have been able to find himself or to lose himself alongside us.”

I am drawn to Debord’s proposal as one instance in a larger genealogy of topological practices in contemporary art. What drew my attention as I patiently shuffled through Jorn’s voluminous papers was the odd conjunction of the two words in the title of Debord’s manuscript: labyrinth and educational. The situationists made fun of the signs posted in the Jardin des Plantes in Paris, forbidding one to play in the labyrinth. Why then was Debord interested in such a serious game as an educational labyrinth? What might his maze have to teach theindividual who ran its gauntlet?