Michael Rakowitz’s The Invisible Enemy Should Not Exist 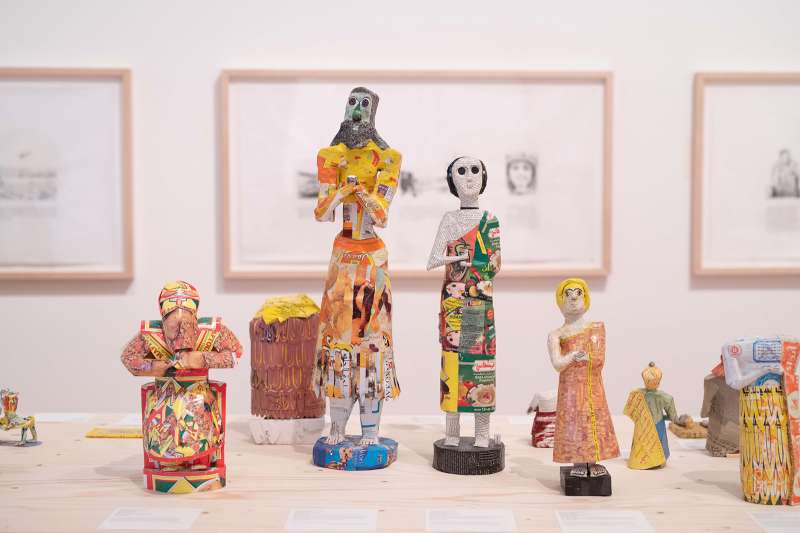 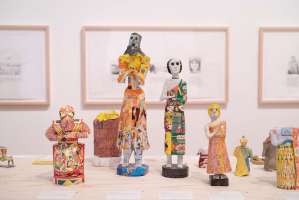 In 2006 Michael Rakowitz and his studio assistants began to make a series of paper-paste sculptures of votive figurines and replica pottery, many dating back to the Old Assyrian Empire (2025–1378 BCE). Each object is made with a combination of colorful Middle Eastern food packaging, advertisement flyers, and Arabic-language newspapers sourced from cities across the United States, where the artist lives and works. What Rakowitz refers to as “surrogates” are scale copies of missing Assyro-Babylonian artworks informed by details and images compiled by Interpol and the Oriental Institute at the University of Chicago. Their databases list eight thousand objects lost, destroyed, or looted from the Iraq Museum in Baghdad from April 10 to 12, less than a month after the UK- and U.S.-led invasion of Saddam Hussein’s Ba’athist republic on March 19. When displayed, the works are laid on makeshift wooden tables, as if to be photographed, categorized, or sold. Each is accompanied by an index card, like those commonly found in museums, detailing provenance information, excavation, and museum numbers—if known—alongside materials and status of the original object, together with a quotation attributed to witnesses of the looting or to archaeologists. For example, one quotation from Selma Al-Radi reads, “With war comes destruction, the loss of thousands of years of human history.” Others are attributed to military figures, including Donald Rumsfeld, the U.S. secretary of defense during Iraq’s invasion and subsequent occupation, who is quoted as saying, irreverently, “Stuff happens.”

More than being simple reproductions, Rakowitz’s works raise the problem of how to mark the loss and destruction of cultural heritage while simultaneously recognizing the strategic displacement and plundering of assets as being part of a longer historical continuum.

Michael Rakowitz’s The Invisible Enemy Should Not Exist